GAINESVILLE, TEXAS— More than 10 cars are lined up throughout the shop floor— all in different phases of repair and restoration. Some are just the framework of possibility, like the beginning sketches of what will become a masterpiece. 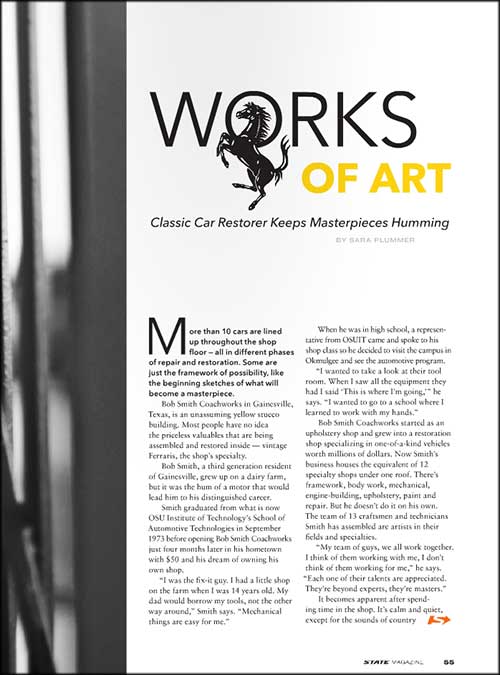 Bob Smith Coachworks in Gainesville, Texas, is an unassuming yellow stucco building. Most people have no idea the priceless valuables that are being assembled and restored inside— vintage Ferraris, the shop’s specialty.

Bob Smith, a third generation resident of Gainesville, grew up on a dairy farm, but it was the hum of a motor that would lead him to his distinguished career.

Smith graduated from what is now OSU Institute of Technology’s School of Automotive Technologies in September 1973 before opening Bob Smith Coachworks just four months later in his hometown with $50 and his dream of owning his own shop.

“I was the fix-it guy. I had a little shop on the farm when I was 14 years old. My dad would borrow my tools, not the other way around,” Smith said. “Mechanical things are easy for me.”

When he was in high school, a representative from OSUIT came and spoke to his shop class so he decided to visit the campus in Okmulgee and see the Automotive program.

“I wanted to take a look at their tool room. When I saw all the equipment they had I said ‘This is where I’m going,’” he said. “I wanted to go to a school where I learned to work with my hands.”

Bob Smith Coachworks started as an upholstery shop and grew into a restoration shop specializing in one-of-a-kind vehicles worth millions of dollars. Now Smith’s business houses the equivalent of 12 specialty shops under one roof. There’s framework, body work, mechanical, engine-building, upholstery, paint and repair. But he doesn’t do it on his own.

The team of 13 craftsmen and technicians Smith has assembled are artists in their fields and specialties.

It becomes apparent after spending time in the shop. It’s calm and quiet, except for the sounds of country music playing gently through the speakers. Not exactly what one would expect from an automotive repair shop.

Each person concentrates on their own task at hand, trusting that everyone else is just as focused on their job, so that when all these pieces come together, everything has been painstakingly crafted so the vehicles are as good as new.

Buck Buchanan has worked with Smith for 33 years; they were even roommates at OSUIT.

In fact, just like the cars themselves, the owners are also unique. Buchanan said some treat their cars like works of art, keeping them pristine in garages like a museum piece. Others like to drive them the way they were initially made to be driven— like a sports car.

Smith said his shop typically has anywhere from eight to 15 projects going at a time, each in a different phase of repair or restoration. And depending on the complexity of the project, it can take anywhere from 5,000 to 7,000 man hours to complete. That’s a year and half to three years’ time.

Chad Baldwin has been with Bob Smith Coachworks for 31 years and starting working for Smith when he was just 16 years old.

“I learned as I went. Bob’s a good boss. He understands it takes time to do it right. They’re hand-made cars, that’s the only way to restore them,” Baldwin said.

Also housed in the shop are 12 different coachbuilders, devices that build the body of automobiles. It was these types of coachworks that Ferraris and other luxury automobiles were originally built on. It’s also where the name Bob Smith Coachworks comes from.

“Twelve cylinder, six-cylinder, four-cylinder, we’ve worked on every Ferrari that was built on the 12 coaches,” Smith said.

Smith’s shop is one of only three in the U.S. that restores vintage Ferraris, and he has clients, many loyal repeat customers, from across the country and the world including Mexico, Canada and Europe. But Smith said his team can do things not all shops can do.

It’s one of the lessons he took with him from his days as a student at OSUIT.

“The skills I learned there I still apply to my work every day,” he said. “It inspired me in such a way, it was huge. I still think about some of my instructors. If you applied yourself, the sky was the limit on what those instructors could teach you.”

Smith has stayed connected to OSUIT over the years, serving on the advisory board on and off for 20 years.

“That was inspiring, too. The department heads and instructors listened to us and our suggestions and actually used that in the classroom,” he said.

Even after four decades, Smith still gets a feeling of fulfillment seeing a project go from bare bones to being driven out of his shop.

“I look at the potential. It can be a big pile of junk, and what we can turn it into is beautiful. When it’s finished, there’s satisfaction you made it work,” he said. “We’ve made so many people’s dreams come true.” 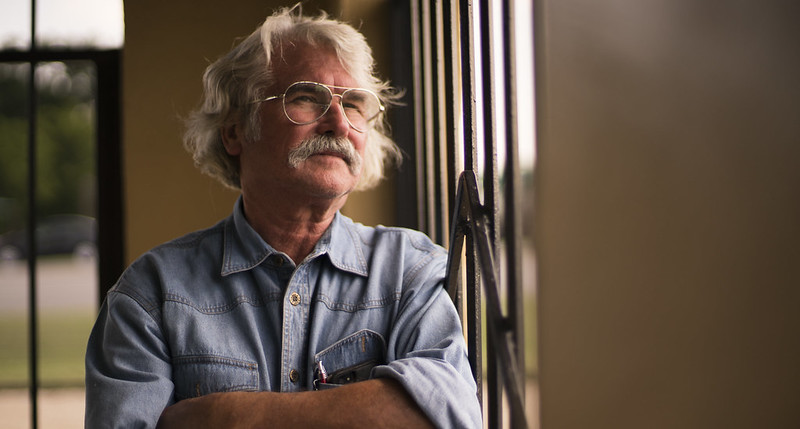