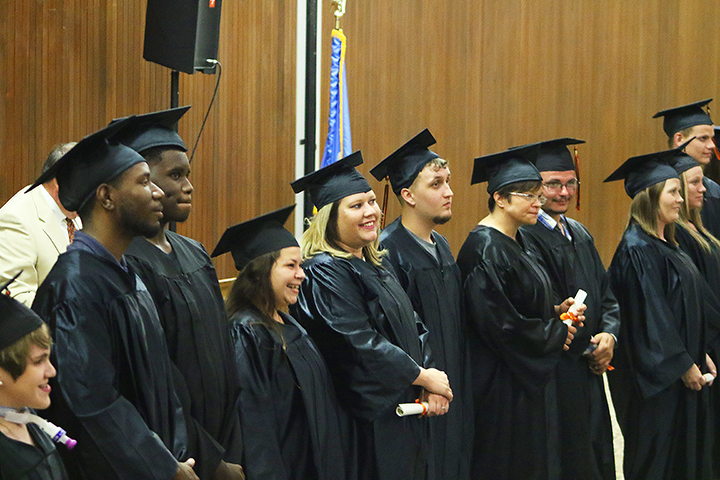 They walked in single file wearing black gowns and mortarboard hats, smiles on their faces as those in the audience cheered and clapped.

“Pomp and Circumstance” played. There was a commencement address and rolled up papers standing in for diplomas were handed out. It looked a lot like a typical graduation ceremony, but those graduating weren’t typical students. Many had waited years, even decades, to wear that cap and gown.

They were part of the latest class of graduates from OSU Institute of Technology’s Adult Basic Education program, which assists people in passing their General Education Development exams and then transitioning them into higher education.

A graduation ceremony was held for them on July 13 in Covelle Hall with OSUIT President Bill R. Path serving as the keynote speaker.

“You put in the time, you put in the work, you put in the effort. This is your night,” Path told the graduates sitting in the front row. “Now with your diploma, hopefully you will use it to open doors that were previously closed to you.”

Of the 22 students who recently graduated from the program, five have already enrolled or are in the process of enrolling at OSUIT, said Fran Colombin, ABE director and instructor.

Daniel Barrett is one of those students. He said it had been at least 10 years since he was last in a classroom when he decided he wanted to go back to earn his GED.

“I had been thinking about it. I got to the point where I was ready for a better life,” Barrett said, but it wasn’t easy. “I didn’t want to do the work again, but if I wanted a better future, I better buckle down and do it.”

Barrett is interested in OSUIT’s School of Diesel & Heavy Equipment.

“My goal was to get the GED and then go to college and go into a trade. I’ve always been into mechanics. I like working with my hands. I lived above a garage, and it sparked my interest in being a diesel mechanic,” he said.

Lori Smith said she had wanted to go back to get her GED for 27 years, but it took some encouragement from people she worked with to finally get her to enroll.

Smith, who is enrolling in OSUIT’s Air Conditioning & Refrigeration program, was working at a casino when she first became interested in heating and air conditioning.

“I got thrown into it when I worked at the casino. There would be a problem with the A/C, and I would go with the guys who worked on it and got interested. They said ‘Hey, you’re pretty good at this, have you thought about going to school for it?’ It pushed me into doing something,” she said. “I had dabbled in the heat and air conditioning at the casino, but if I wanted to go further, I needed to get my GED first.”

Colombin said Barrett and Smith are just a few of the program’s success stories. In the 2016-17 school year, 180 students went through the day or evening ABE program at OSUIT or one of the five satellite locations in Okmulgee County and the surrounding area. She hopes to serve about 225 students in the 2017-18 year.

And the students are each other’s biggest supporters, she said.

“The camaraderie they have—I’ve never seen a group of students who care about and love each other like these students do. They are not judgmental; they welcome each other with open arms,” Colombin said.

But what touches her heart the most are the educational gains the students make while in the ABE program, she said. Some students come to class on the first day with elementary-level reading, math and language skills.

“They come to my class with a preconceived notion that they can't learn, or they have a learning disability… They raise their levels to those of graduating seniors and pass geometry, Algebra I and II, comprehensive reading, argumentative essay writing, advanced language mechanics, science and social studies,” Colombin said.

“I'm so proud of them. I’m so happy for them. This enables them to change their lives. They can go to school; they get a career.”