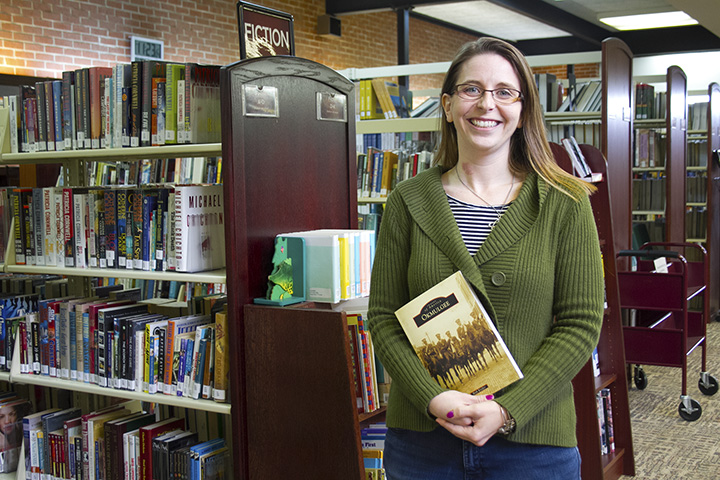 For Beth Kieffer, history is about stories.

“History is something people need to know. If you don’t know where you come from, you won’t know where you’re going,” said Kieffer, archivist and reference and instruction librarian at OSU Institute of Technology.

Kieffer’s book “Images of America: Okmulgee” was just released from Arcadia Publishing. Kieffer will be on hand for two book signings in Okmulgee: the first on Thursday, March 31 from 6 to 7 p.m., at the Okmulgee Library, 218 S. Okmulgee Ave., and another during OrangeFest on April 8 from 5 to 8 p.m., downtown on the Square.

“With this book, I started with pictures. It’s primarily a pictorial history, then I wrote the narrative around the photos,” she said. “It’s been a lot of work, took a lot of time.”

Kieffer said she was able to utilize historical photographs and information from the Muscogee (Creek) Nation, the Okmulgee Public Library and OSUIT archives.

“There were so many pictures. I love looking at old pictures, but it was also the challenge, finding where the pictures belonged in the bigger context of the story,” she said. “It was challenging, but it was fun.”

And a lot of work.

“I think about halfway through I thought ‘Why did I say I would do this?’” she said. “But by the end, I’m really proud of it. I’m happy with how it turned out. It was a labor of love.”

Some of the more interesting things Kieffer discovered while doing research for the book was Okmulgee once had a streetcar that ran through downtown and that the city was once home to 43 millionaires. There were also several amusement parks in town with Ferris wheels and rides.

“When people find out I’m an archivist, they just start telling me stories,” she said, and she hopes that continues at her book signings. “I’m looking forward to hearing other people’s stories, maybe they were at some of these events featured in the book.”

Kieffer said her book is in no way the definitive history of Okmulgee, but she does hope it gets people talking and thinking about their own past.

“Maybe it will give someone the bug to write their own family history or their own history of Okmulgee,” she said. “Okmulgee has always been a tight-knit community. Within the last couple of years people are looking at the town’s history and finding things to be proud of.”

Kieffer’s book “Images of America: Okmulgee” will be on sale at both book signings as well as at Barnes & Noble and Books-A-Million locations in Tulsa. It’s also available online at Amazon.com.