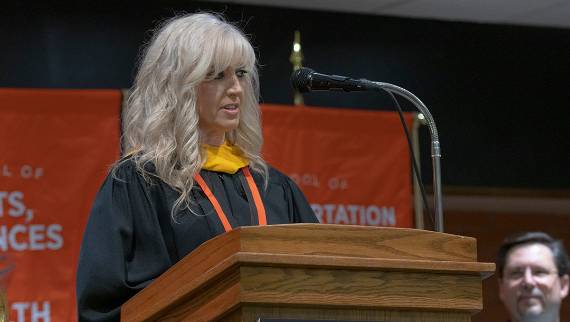 With words of encouragement fresh on their minds, students from the 214th graduating class from OSU Institute of Technology walked across the stage with diplomas in hand and a new career waiting on the horizon.

“We have 199 students graduating from OSUIT this afternoon, and of those, 62.8% are graduating with honors,” said Path. “Such academic achievements do not come easily and deserve our recognition.”

Jamie Diggins, OSUIT Nursing faculty, spoke at the ceremony and while congratulating the graduates on their accomplishments she challenged them with questions to reflect upon as they prepare to enter the workforce.

“What is it that motivates or inspires you to achieve your goals in life?” asked Diggins. “What are your professional goals? Your goals may change over time, as well as your values depending on your experiences, and that is OK. What is important is to let your values consistently guide you and remain true to yourself when making your decisions.”

Diggins shared how she learned to accept her students’ constructive criticism and worked to improve based on their feedback.

“Self-confidence in the workplace is developed by acknowledging your accomplishments, but remembering to remain humble during your successes,” said Diggins. “Learn to actively listen, talk less, and value others and their opinions, regardless of your knowledge and experience. Rely on others who shine in certain areas in which you are lacking and learn and grow from them.”

John Caleb Mohr, student respondent graduating from the School of Arts, Sciences & Health, is no stranger to learning from others who shine in his industry. He shared how his mindset changed after being mentored by Chef Brenda Nimmo, instructor for the Culinary Arts program.

“When I first came to OSUIT, I had it in my head that I already knew everything I needed to,” said Mohr. “Chef Nimmo taught me a valuable lesson, which was that I was wrong. I don’t believe I would have grown as a culinarian without realizing I needed to grow, and I have her to thank for that realization.”

Although Mohr felt that he had grown through his time at OSUIT, he acknowledged that he, like many others, had experienced failures which would ultimately lead to success.

Originally attending college to become a doctor, Mohr found his true passion in the Culinary Arts program after previous attempts at other colleges and degree programs.

“People gave many reasons why I hadn’t succeeded previously, but in reality, I just don’t think I applied myself at all,” he said. “I felt ashamed for so long, I even avoided interacting with people who had once been close to me because I was afraid they would think less of me because I’d failed.”

Mohr said that he wanted to share this experience to make it easier for others to talk about their own failures. He reminded the graduates that just because you fail, does not mean that you are a failure.

He shared that through his failure, he was able to grow.

“I just completed an internship at a Michelin-starred restaurant in the south of France, making me one of the few OSUIT culinary arts students to enter an internship abroad, in France, the heart of modern culinary tradition. But this wouldn’t have been possible had I not failed. I only got my internship because I happened to attend OSUIT at just the right time.”

Mohr congratulated the graduates and left them with the reminder that we are all human.

“We’re here because we succeeded, but success is not guaranteed, only failure is,” said Mohr. “It’s a part of life, a part of being human. We’re not supposed to be perfect or static. The greatest strength humans have is our ability to encounter difficulty and change. We can make a change if we want to. I can say with certainty that I will always want to make that change.”