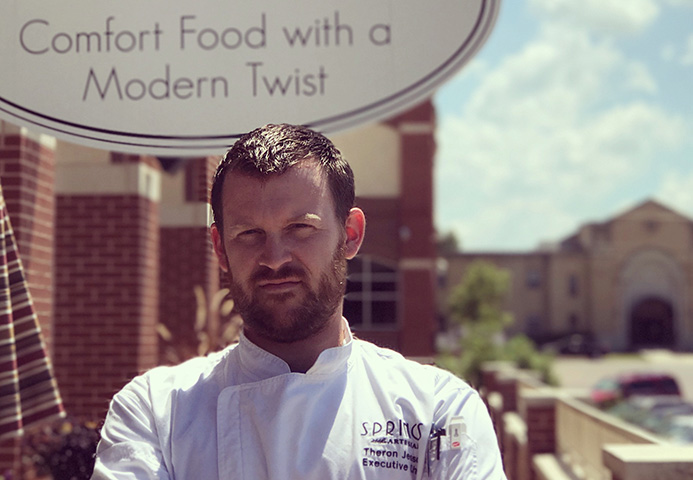 Chef Theron Jessop will be returning to his alma mater, OSU Institute of Technology’s School of Culinary Arts, to serve as guest chef at the second Cowboy Chef’s Table luncheon.

The second luncheon in the Cowboy Chef’s Table series is Tuesday, Oct. 10, at noon in the State Room on the OSUIT campus, 1801 East 4th St., in Okmulgee.

Guest chefs spend the morning with students teaching them how to prepare the luncheon dishes. Then at noon, the guest chef will present a cooking demonstration of that day’s featured dish to attendees in the State Room as well as talk about his or her career and culinary style.

Tickets to the luncheon are $15 with proceeds going to the Cowboy Chef’s Table Scholarship Fund for OSUIT culinary students. U.S. Foods and Ben E. Keith are donating the food for the luncheons, and U.S. Foods has already donated $500 to the scholarship fund.

School of Culinary Arts Dean Gene Leiterman said he wanted to have an event that would benefit students and bring renowned chefs as well as guests from the surrounding area and potential students to the OSUIT campus.

“We want to create an experience for all parties involved,” Leiterman said.

Jessop graduated from OSUIT in 2008, and in the nearly 10 years since, he has helped open three major restaurants in downtown Tulsa including Ti Amo Ristorante as well as the 31st and 32nd floors of the Summit Club.

He moved to Oklahoma City to be Chef de Cuisine at the Skirvin Hilton Hotel in 2011, and then last year he had the opportunity to move back to his hometown of Sulphur as Executive Chef of the Artesian Hotel.

Jessop is the second guest chef in the luncheon series with four other presentations scheduled in the 2017-18 school year.

The Cowboy Chef’s Table luncheon series kicked off in July with guest chef Ryan Lopez and raised $2,500 for the scholarship fund.

In addition to the students learning from the guest chef, the event was also a benefit to Lopez.

“Chef Lopez reached out to me and said it made a big impact with him. It reminded him of being in school and what it was like as a student, and now he wants to establish a scholarship in his name,” Leiterman said.

The luncheon series is already garnering attention from other renowned chefs in the area.

“I have chefs now approaching me to ask to be involved and present,” he said. “We’re already lining up chefs and getting the schedule together for the next series.”

For more information or to reserve your seat to the Cowboy Chef’s Table luncheon, go to osuit.edu/chefstable.