Culinary alumni return for next Cowboy Chef&#039;s Table in December

Culinary alumni return for next Cowboy Chef&#039;s Table in December 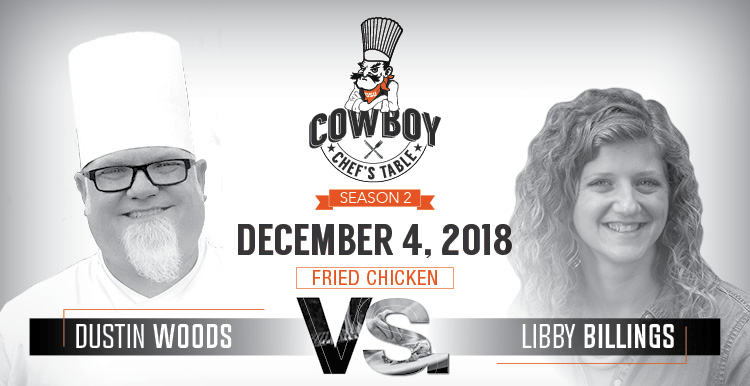 The series’ second luncheon of the 2018-19 season is Tuesday, Dec. 4, with not one, but two chefs preparing dishes for attendees in the State Room.

Chef Dustin Woods worked for 20 years in professional kitchens before he earned his degree from OSUIT in 2010. He is now banquet chef at Big Cedar Lodge resort in Branson, Missouri.

“I’m truly honored to be asked to be a part of Cowboy Chef’s Table. I think it’s a great way to provide scholarships to students who are working hard to achieve their goals,” Woods said. “I love the support that’s behind OSUIT’s School of Culinary Arts and want to do my part to give back as much as I can.”

Chef Libby Billings graduated from OSUIT in 2002 and is now owner of three downtown Tulsa restaurants— Elote Café and Catering, The Vault and Roppongi.

“I’m really excited to see how things have changed. The restaurant industry has grown significantly since I left OSUIT,” Billings said. “I imagine the kitchens at OSUIT have too.”

Both are eager to be back in a culinary school kitchen again, but this time they’re the ones doing the teaching.

“I am looking forward to working with the students and helping them see other chefs’ takes on certain foods, recipes and techniques. I want to help them to learn and grow to meet their goals,” Woods said.

The guest chefs are invited to create a lunch menu centered on an American classic dish and they work directly with the Culinary Arts students to prepare their menu. The guest chefs then do a live cooking demonstration and talk about their culinary styles to luncheon patrons.

“The chefs seem to love the fact that they get to do a demonstration with another chef. They are all thinking in the mindset of whose dish is better. But what they really enjoyed was working with the students,” said Culinary instructor Rebecca Johnston.

When it comes to their culinary style, Billings and Woods always like to put their own spin on whatever they are creating.

“I like simple, fresh, real ingredients. I think using good quality ingredients like fresh garlic rather than dried garlic or making soups from scratch rather than from frozen base makes all the difference,” Billings said. “On a personal level I am a vegetarian. I know my plant-based diet does influence my cooking even though I prepare meat at all three restaurants. I only use free-range, hormone-free meats in the restaurants in an effort to be a good steward to the environment, the animals’ and my customers’ health.”

Woods said he loves cooking a variety of food from many cultures, but classic American is probably his favorite.

“I do have to put a spin on the classic dishes and make them my own though,” he said. “Being able to show the students that even when you are told to make a simple dish like fried chicken doesn’t mean you cannot get creative. Don’t be afraid to get outside the box, have fun and show what you can do.”

Each of the series’ four luncheons begins at noon and the cost will be $20 per person. Three of the four luncheons will take place in the State Room on the OSUIT campus and one will be held at the recently opened Mother Road Market in Tulsa.

The series is sponsored by Ben E. Keith and U.S. Foods with Mother Road Market also partnering up to sponsor the third luncheon held at their location.

The goal of the series is to raise money for scholarships for Culinary students. The series’ inaugural year raised close to $13,000. The first luncheon in this second series raised just under $2,000, said Johnston.

For more on Cowboy Chef’s Table luncheon series, or to make a reservation, go to osuit.edu/chefstable.