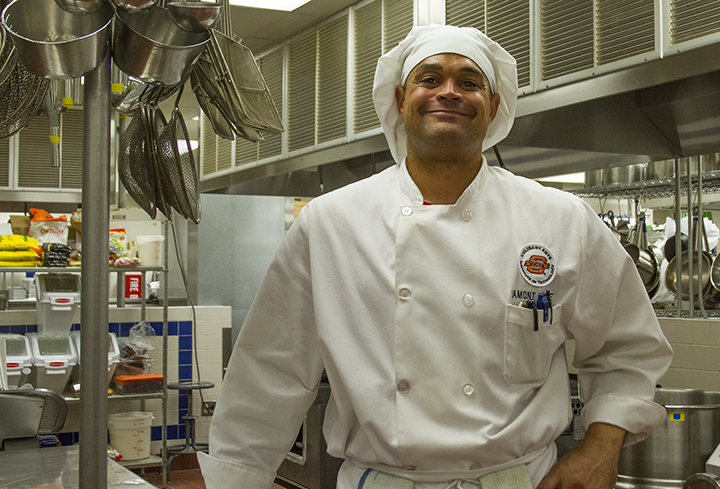 “I’ve always had a passion for cooking. It’s the only job I’ve ever had. My jobs have always been in the restaurant industry,” said Ware, who is in his second year at OSU Institute of Technology’s School of Culinary Arts.

He also comes from an athletic background. Originally from Ada, but with family from Okmulgee, Ware knew about OSUIT’s culinary school and thought about enrolling after he graduated high school but decided to play basketball at East Central University instead.

When training and playing basketball weren’t part of his daily life anymore, Ware said he began gaining weight. Working in the restaurant industry didn’t help his waistline, but it did keep his love for cooking and dream of going to culinary school alive.

“It was always in the back of my mind,” he said. A few years ago he was ready for a change, so he enrolled at OSUIT and began classes in August 2015.

He was also ready for a change when it came to his health and body.

“It got to the point where your clothes are tight, you get tired going up stairs, standing all day was uncomfortable. Diabetes runs in my family, and that was really a big motivation for me,” Ware said.

A month after starting at OSUIT, he completely changed his diet and started going to Covelle Hall in the mornings to work out before classes.

“For me, it’s all about routine. The first couple weeks it was really tough, getting your body to do things it doesn’t want to do,” he said. “Once I settled into a routine, it became an everyday thing for me, like brushing your teeth.”

Losing weight isn’t an easy undertaking, but it can be a real challenge for someone surrounded by food all day.

“It has its days,” Ware said of trying to abstain from certain foods while also learning to cook them, but being a culinary student also presented him with benefits like learning to cook with fresher, healthier ingredients. “It’s actually helped more than it’s hurt. You figure out different combinations of healthy foods.”

And the diet hasn’t dampened his passion for cooking.

“I love it. I like learning new techniques, learning about different ingredients and different cuisines,” said Ware, who interned with Ludger’s Catering in Tulsa. “I like the catering business.”

In the nearly two years since Ware started at OSUIT, he has lost about 90 pounds.

“I have so much more energy, I’m clear-headed. I’m not as tired at the end of the day,” he said.

People are now asking him for tips and advice on how they can lose weight.

“There has been quite a bit of reaction. I’ve been asked to help people out with diets, write out workout plans,” he said. “It’s inspiring; definitely humbling. It makes me want to push myself even further.”