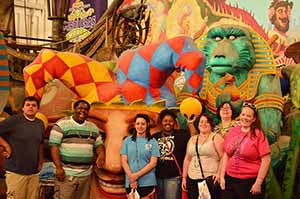 As far as culinary trips go, New Orleans is a tough one to beat. The food is as much a part of the culture there as Mardi Gras and Voodoo.

Each spring members of OSU Institute of Technology’s chapter of Future Chefs of America take a trip to a major metropolitan area of the country to try out the food and see the sights, and this April the group of 11 students and two instructors visited the Big Easy.

In past years the club has gone to cities such as San Antonio and Chicago with the members raising money throughout the year for the trip. Faculty narrow the list of possible destinations down to three or four cities and the students vote for their favorite.

Cody Gragg, the new FCA president, said this was his first trip to New Orleans.

“It’s beautiful and has a lot of history. They take pride in their city,” Gragg said. “The food was fantastic. I’m a huge fan of Cajun food.”

The group had three main dining experiences during the trip including eating at La Provence Restaurant, K-Paul’s Louisiana Kitchen and Arnaud’s Restaurant.

Instructor and Chef Bill Leib said the three restaurants each represented a different style and era of cooking in New Orleans, both classic and modern.

“We ate at some pretty well-known places,” Leib said. “We spent a lot of time in the French Quarter. We were immersed in the Quarter.”

Gragg said he really enjoyed the time they got to spend in the city taking in the food and culture.

In addition to the culinary aspect of the trip, the students and faculty also saw where Mardi Gras floats are stored, went to an alligator farm, toured a swamp and visited the National World War II Museum.

“We want to visit places that have a good food scene as well as things to do and see to keep students involved,” Leib said. “We got to see a bunch, but we still didn’t get to see everything.”

This was also the first time he had been back to New Orleans since Hurricane Katrina wreaked havoc on the city nine years ago.

“They’ve had a chance to rebuild it, at least in the parts where we were, but it did have a different feel to it,” he said.

Overall, everybody seemed to enjoy their time in the city, Leib said.