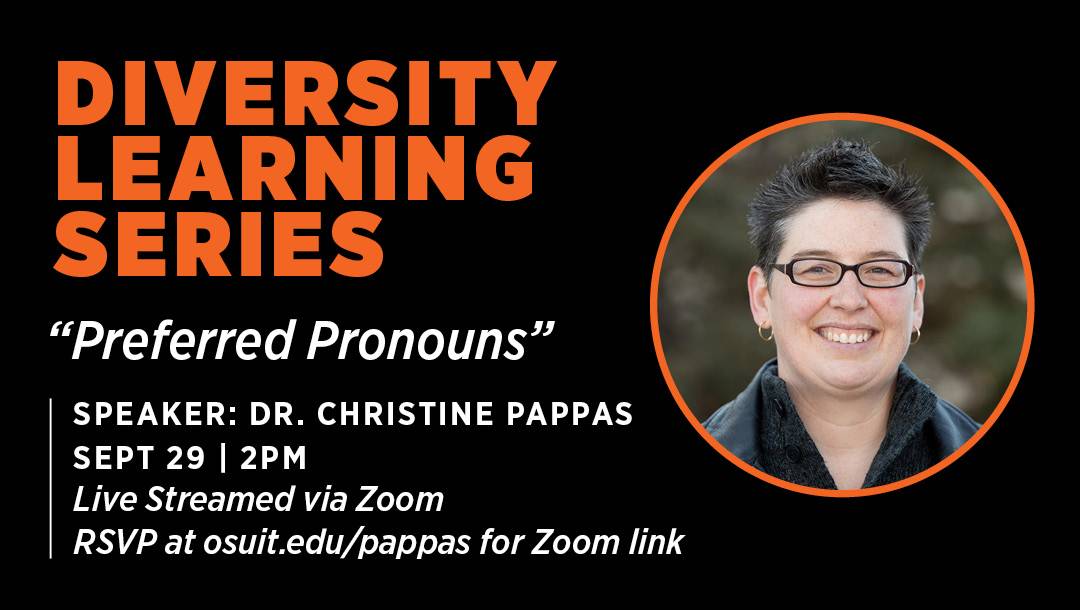 Christine Pappas, J.D., Ph.D., will be the next featured speaker in the OSU Institute of Technology virtual Diversity Learning Series. The OSUIT Diversity & Inclusion committee welcomes Pappas to speak to the campus on the subject of preferred pronoun usage.

Pappas, who is chair and professor of Political Science and Legal Studies in the Department of Law, Politics and Society at East Central University, will join the campus virtually via Zoom on Tuesday, Sept. 29, at 2 p.m. This is a free event available to all OSUIT students, faculty and staff. Those interested in attending can RSVP on the calendar event to receive a Zoom link.

"Persons who identify as transgender and non-binary, those whose sense of identity and gender differs from their birth sex, have higher suicide rates than that of the general population," said Agnew. "One of the simplest ways to support transgender people is by asking for and using the correct pronouns. Such an easy affirmation, but one that may end up saving a life.”

Pappas's topic will cover the changing use of pronouns in an environment where transgender, gender-fluid and agender people are taking a more prominent place in society and how to support them and other members of the LGBTQQIAP+ community. It will also include her relationship with the ECU PRIDE students and how they helped teach her about the importance of using correct pronouns.

"I think it's important for people to know the impact it has on people to be called by the wrong name or misgendered," said Pappas. "One of my students told me it was like I had punched them in the stomach when I used the wrong pronouns."

Pappas said that using proper pronouns and names is even more critical now because of the laws that protect them.

"Under the Supreme Court case Bostock v. Clayton County, employers can't discriminate on the basis of sexual orientation or gender identity," she said. "If an employer uses the incorrect pronouns, it may create a hostile work environment and open the employer up to a lawsuit."

In her role at ECU, Pappas teaches Political Science, Research Methods, Constitutional Law, Women in Politics & Tribal Politics and has been a faculty adviser for ECU PRIDE since 2001.

She earned her B.A., MA and Ph.D. at the University of Nebraska-Lincoln and her J.D. at the University of Nebraska College of Law. She is a licensed attorney and Director of the Native American Legal Clinic at ECU, serving students, staff and local Native Americans. The clinic provides a specialty service for legal name changes and changing gender markers on birth certificates.

Her Ph.D. in Political Science is with an interest in how minority communities, including LGBTQQIAP+ people, gain rights in a democracy. She specializes in U.S. Supreme Court decision making. Her preferred pronouns are she/her.

"We want everyone to feel comfortable and welcome on the OSUIT campus, and educational programs like this help to accomplish that," said Dana Sterling and Lisa Currington, co-chairs of the Diversity & Inclusion Committee. "We hope this will be a valuable learning experience for our campus community. Our students will most likely be working with transgender people at some point in their careers, and we want to help create understanding. We want our transgender students to feel welcome and to know they are seen and accepted on our campus."

The committee is planning for the Diversity Learning Series to be a once a month event via Zoom. They anticipate the series will continue through the fall and spring semesters, at some point resuming in-person events.