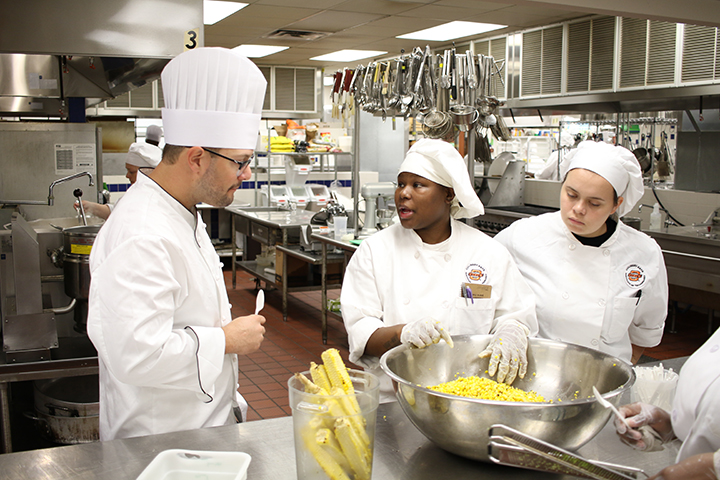 That’s how Chef Ryan Lopez kicked off the first ever Cowboy Chef’s Table lunch and learn series Monday, July 24, in the State Room at OSU Institute of Technology’s School of Culinary Arts.

Lopez, personal chef to NBA star Kevin Durant, did a cooking demonstration of his dish—roasted chicken on a bed of farrow and roasted corn with pesto yuzu sauce— for a sold-out audience of 120 people, who then were served the same meal prepared by culinary students.

The luncheon was the first of the guest chef series continuing throughout the 2017-18 school year.

Tickets for the luncheon were just $15 with proceeds going toward the Cowboy Chef’s Table Scholarship Fund for culinary students. Monday’s event has already raised about $2,000 for the scholarship fund including a $500 donation from U.S. Foods presented during the luncheon.

U.S. Foods and Ben E. Keith are donating the food for the guest chef series so more of the proceeds can go into the scholarship fund.

Before the luncheon, Lopez was in the kitchen with about 25 culinary students, directing them on how to prepare his recipes and teaching them a little about his cooking methods and the ingredients he uses.

A few hours before the event, it was all hands on deck in the culinary school kitchens with instructors and students busily preparing the elements of the dishes in an almost assembly line-like fashion.

Being a personal chef, Lopez said he loved being in a hectic and bustling kitchen again.

“It’s great being with the students. The students are phenomenal; they’re hustling, doing everything you ask them to do. They’re taking this seriously,” he said, taking the opportunity being back in a culinary school to integrate some lessons into his direction. “I do enjoy teaching, I do enjoy watching students really thrive in culinary school and bust out into the person they never knew they were. Cooking does that to people.”

Chef Gene Leiterman, School of Culinary Arts dean, said it was beneficial to students and faculty to have Lopez share his culinary point of view and his career journey.

“I think we all gained inspiration from Chef Lopez and his story as he went from a student to his role today as Kevin Durant’s personal chef,” Leiterman said.

Lopez said he’s glad he could help the next generation of chefs by being the first guest chef in this scholarship fundraising luncheon series.

“I really wanted people to come and take a look at the students and the faculty and the staff and what they’re doing here,” he said. “Students are getting a great culinary education at OSUIT.”

Leiterman said he’s proud of the students and what they accomplished with Lopez.

“They used what they have already learned in school and applied that knowledge directed by another chef and his point of view,” he said. “Chef Lopez repeatedly mentioned the skills and dedication of the students and faculty and his belief that the future of the culinary food scene in Oklahoma is thriving, and OSUIT is a part of that.”

Watch the video of Lopez's demonstration during the luncheon on OState.TV.