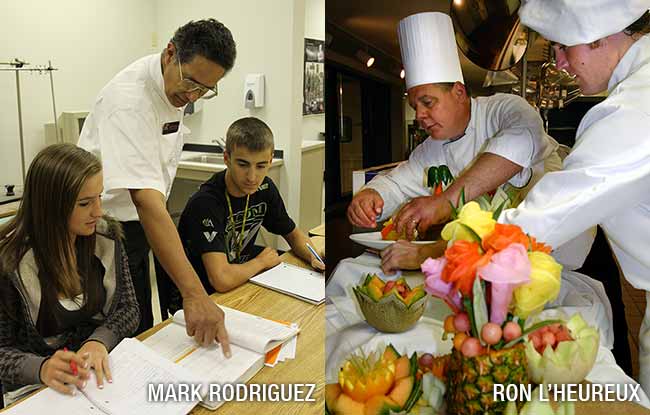 Both instructors have received similar recognition for teaching performance in the last year. Rodriguez was named a Regents Distinguished Educator in December and L’Heureux was awarded the OSUIT Outstanding Faculty Member last summer.

“I’m continuing to be humbled by the all the accolades,” Rodriguez said. “When you pour your heart into something and people appreciate it, it’s nice.”

L’Heureux said after being honored with the faculty award last year, he wasn’t expecting anything more.

“I was very surprised and humbled,” he said. “I just teach my students. If they go out and are successful, that’s what matters to me.”

Both men admitted to being ill at ease when it comes to recognition.

“I don’t feel comfortable with everyone patting me on the back. Just to have the opportunity to have these students up and running is what it’s all about,” Rodriguez said.

Both are also transplants to Oklahoma from the Northeast. L’Heureux grew up in Connecticut and attended the Culinary Institute of America in New York while Rodriguez got his master’s degree from New York University and then taught high school in Massachusetts.

Work brought them both to Oklahoma and their families are why they stayed.

L’Heureux started teaching in the School of Culinary Arts in 1995 after working as executive chef at Indian Springs Country Club in Broken Arrow.

“I had hired some students from here, and I had come down and toured the place a few times. I heard about an opening and applied,” he said. “I had just got married and had a baby, so it was a better fit.”

“Here, it’s a real hands-on school. The students are prepared to be productive. They have a real chance to speak and communicate with the person who is teaching them,” he said.

And the two aren’t strangers. In fact, Rodriguez was part of the committee that chose L’Heureux as Outstanding Faculty Member last year.

“He’s first class. To be honored with him is humbling,” Rodriguez said. “There’s something about the people who are proud of the food they serve.”

L’Heureux said he had a connection with Rodriguez when they met.

“We’ve had several conversations about food and cooking,” he said. “We’re both from the same part of the world.”

And both have similar teaching philosophies and a knack of nurturing and challenging their students at the same time.

“I really enjoy the teaching aspect. I wasn’t sure how that would go, but the longer you teach, the better you understand the students,” said L’Heureux, who teaches a skills class as well as a buffet cooking class. “It gives them a real-world experience. Put the pressure on, like in real life. First year students come in and some don’t realize, being a chef is not just cooking. It’s nights and holidays and weekends. It takes a big personal commitment.”

Rodriguez said he pushes his students so they can recognize their own potential and use it when they graduate.

“You see them rise to the occasion and see they are able and capable,” he said. “You may have an associate degree, but you can do something that affects people’s lives.”

The NISOD Excellence Awards winners will be recognized in May at the 2014 NISOD Conference in Austin, Texas.