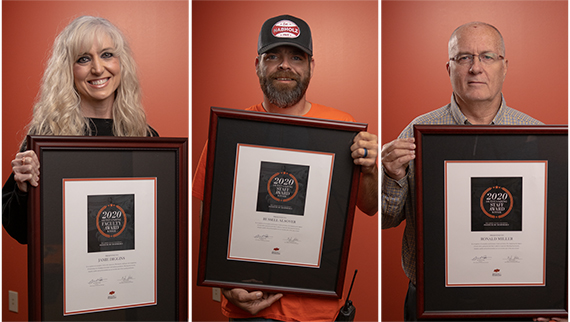 Sponsored by the OSUIT Faculty & Staff Council, the awards are given to acknowledge and praise OSUIT employees who go above and beyond in professional service and inspire those around them to have pride in being an OSUIT employee.

Nominations for the awards are provided by peers who believe their colleagues deserve to be recognized for simply being “outstanding.”

This is the third Outstanding Faculty Award that Diggins has received. She said that it “feels as exciting as what I imagine it feels like to win the Super Bowl.”

“Jamie has a wonderful personality and seems generally concerned about the success and well-being of the students,” said Gibble. “The deciding factor came down to Jamie’s nomination had come from multiple students while the other nominees had departmental nominations. The fact that students would take their time to nominate Jamie spoke volumes.”

“After receiving this award in 2017, I was asked what this recognition meant to me, and I responded, 'I respect and value what this reward represents and will work diligently to try to live up to the standards of representing the Outstanding Faculty Award,'” she said. “Winning this award for the third time, during the most environmentally challenging times I have faced in my professional lifetime, has helped me to grow and accept that change does not have to hinder my ability to make a positive impact in someone’s life.”

Ron Miller has been with OSUIT for seven years. In his role, he assists faculty with building their online courses to meet national standards. Miller also conducts training for pedagogy, how to use the Canvas LMS and helps faculty and students use Canvas. He said this nomination and award came as a surprise to him.

He has played a crucial role in keeping The Center up and running during a critical time. His assistance to faculty during the pandemic to ensure they could make the switch to online learning is a large portion of why he was selected for this award.

“It is always satisfying to have what you do be appreciated by others,” said Miller. “I try to always improve at my job. This tells me that I must be headed in the right direction, so don’t stop.”

Russell Alsover has been employed with OSUIT for eight years. He is one of two electricians on the campus and works on all things electrical from the inside out and data and phone lines. He also assists in repairing equipment and assisting other trades within Physical Plant. His work behind the scenes and willingness to always help others made him the perfect recipient for the award.

“I was shocked to have received this award with so many great employees on this campus. I couldn’t believe it,” he said. “It’s nice to know that I was thought about when the nominations came around.”

A common theme among the recipients was the appreciation for a supportive and encouraging team. They acknowledged that without a strong group of peers, their success wouldn’t have been possible.

“In my opinion, it’s an honor even to receive a nomination for the award,” said Gibble. “This says to employees of OSUIT someone has recognized their efforts. Many employees deserve recognition for their efforts, and this is one way that employees and students alike can honor those who inspired or went beyond their normal duties for those around them.”